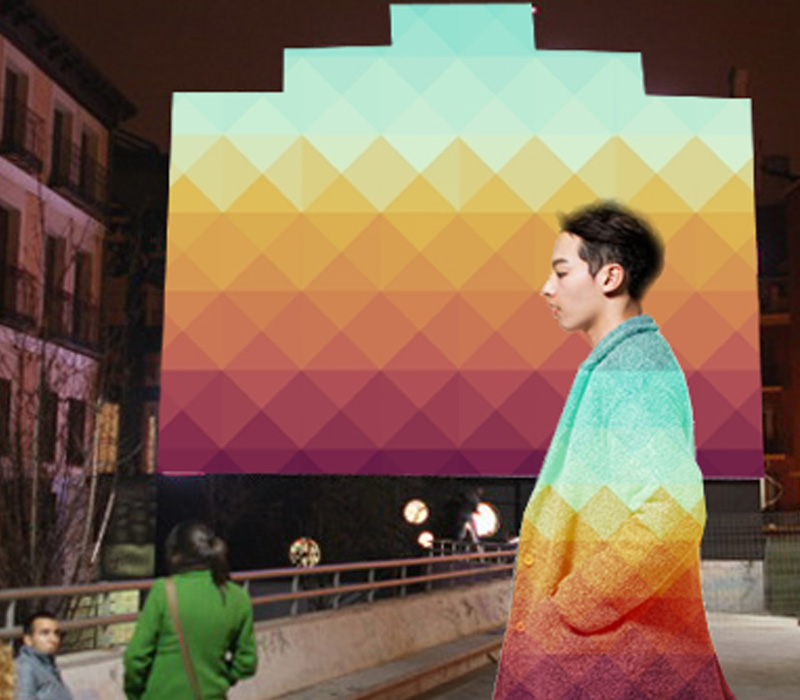 The ‘In/Visible Cities: Prototyping Lab’ took place on 26th and 27th January as part of transmediale 2015 in the SUPERMARKT – initiated by Public Art Lab in collaboration with Fraunhofer FOKUS and funded by the RWE Foundation.

Creative developers, IT experts, urban planners and future visionaries have been invited to create DIY and crowdsourcing strategies dealing with the visualization of invisible technologies and data collection of our cities. The three topics safety (digital citizen), climate change and energy (hybrid city) and translocality formed the participants’ starting point for creating use cases of light scenarios generated through open data, crowdsourcing sensor networks and DIY interfaces.

The three best prototyping ideas have been presented at the panel of the transmediale on 30th January:

The ‘Privacy Collider’ is a light installation of two spotlights equipped with directional microphones that track and capture people in the public space via motion camera. Once being captured by the light beam the talks of the people are transferred to the other beam so that the people can hear each other.

The main idea consists in addressing the personal privacy in a public space. The artists take an experimental approach: how will the people react when they hear the voices and talks of the others, will they communicate, what does privacy mean in a public space? The installation creates an awareness of surveillance by making visible the technology such as tracking and capturing. It uses the possibilities by creating a scenario of bringing people into exchange with each other. At the same time ‘Privacy Collider’ questions the consequences of using these technologies.

Zhipeng Liang is currently student at the University of Arts in Berlin in the master of contemporary media. He is working at the intersection of art, technology and media.

Birk Schmithüsen is media artists and student at the University of arts GHB Leipzig. His works combine sound, visual art, creativ coding and DIY electronics. Birk is co-founder of the collective KollektivArtesMobiles, that works at the intersection of theatre, dance and media art.

Andreas Förster is designer and developer with a computer-science-background.

(WE ARE) LIGHT CATCHERS by Michael Ang

(We Are) Light Catchers collects personal light experiences into a collaborative public light sculpture. Participants wear a light sensor which records the colour and quality of the ambient light around them. Over a period of 24 hours the sensor builds up a “personal light story” specific to that person’s environment and daily habits. Each light recording is shown as animated changes of colour over time in a public light sculpture. Each element of the sculpture is illuminated with one person’s light history. As more people “bring the light” to the sculpture it becomes a place for people to meet and compare our shared experiences of light. Workshops will allow the public to learn about the technology and privacy issues of crowd-sourced data collection while helping to build the wearable sensors. Light Catchers seeks to raise awareness of our individual light environments and gives the chance to “bring your light” to a collaborative public installation.

Michael Ang is a Berlin-based artist and engineer working at the intersection of art, engineering and human experience. His works use technology to enhance our understanding of natural phenomena, modulate social interaction, and bridge the divide between the virtual and physical. He creates light objects, interactive installations, and open source software tools that build towards a future of human technology focused on people and the environment.

Michael’s work has been exhibited at NASA Ames Research Center for Yuri’s Night, transmediale, Gray Area Foundation for the Arts, Art Hack Day, Natalie Jeremijenko‘s OOZ, the California Academy of Sciences, and has been featured in MAKE Magazine and the Creator‘s Project.

SAVE-O-METER by Ricardo O’Nascimento, Melanie Nobis and Achim Friedland
The Save-O-Meter is a workshop that aims to develop an interactive light device/installation to visualize the consumption of water and energy. The workshop will be held to collect and discuss ideas to save energy and water. Those ideas should be implemented and its results displayed by the end of the day on the light object/installation.

The aim of the project is to draw attention to the high consumption of important resources and to make people lower their consumption of these resources. We believe that doing this with an interactive tool is an effective way to show people that each of us can contribute to achieve an overall goal.

Achim Friedland is an open source software developer, author and photography enthusiast. His interests lie where technology, transparency, security and Linked Open Data meet with the user base creating new insights. Together with the Open Knowledge Foundation Germany he is currently setting up a local OK Lab for the people of Jena.

Melanie Nobis works currently as an Sales and Consultations Agent at the tourist information centre of VisitBerlin. She holds a bachelor degree in International Tourism Management as well as a master degree in Tourism and Regional Planning. In general, her focus lies on sustainable urban development as well as community based tourism.

Honorary mention: BLACKOUT by Rodrigo Delso Gutiérrez and Victor Mazón Gardoqui
Blackout is a light intervention in public space. The public lightening will be turned off for a dedicated period of time in order to create a collective memory and ritual. The project is mentioned as an urban action linking time, absent and emptiness fulfilled with interior and personal references to public space, hidden cities, power of public light/ing and natural light.

From a social state it is intended to create a parenthesis on daily synchronization to urban life and citizens’ common periods.

Public resources are dislocated in time to engage an art that reflects contemporary urban electric resources from a political, minimalistic and conceptual approach.

Rodrigo Delso Gutiérrez is student architect and PhD student in architecture. He is working at the intersection of art, architecture and media.

Victor Mazón Gardoqui is freelance designer and independent researcher. His work materializes in three main fields: actions or site-specific performances through experimental processes, exhibitions as consequences of previous actions and collective work through collaborative groups, or seminars in cultural and academic centers.

For further information and a visual summary of the Prototyping Lab, please have a look at the documentation video, at the photos on flickr or read Sandra Moskova’s report, which describes the process and emergence of the projects.